This is the third in a series profiling positive people and attempting to discover what exactly “positivity” is. If you know a positive person we should write about, email kiramnewman @ gmail.com! 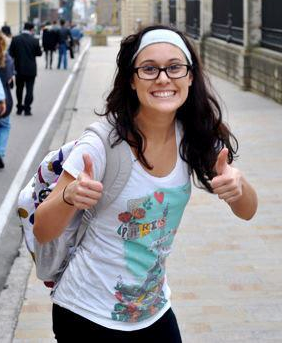 One of my first interactions with Fran Rugo was at the SXSW conference last year. Tech Cocktail was putting on a huge event, and I arrived around 7 am to help out. Fran, an event consultant for us, had already been there for an hour or so. She was probably exhausted, and we barely knew each other at that point, but she greeted me with a big, genuine Fran smile. I liked this girl.

It might have been obvious to me that Fran was a positive person, but she had only just realized it at that point. “For me, it’s just how my mind works,” she says. Her friends insisted her positivity was unique, but she couldn’t see it – until a personality test confirmed that out of 34 strengths, positivity was her #1.

Fran was lucky to grow up with happy, grateful, hardworking parents. But her brain rebelled against the little negativities she sometimes heard from them – a complaint from her father about a B on her report card, or her mother repeating the Italian phrase “If I live to see another day.” She made a conscious decision to always do her best, and be happy with the outcome: a combination of hard work and acceptance.

I learned from Fran that her big smile dates all the way back to high school, when she went out of her way to cheer other people up. Walking through the hallways, she would think, “Well, I’m going to smile as much as I can because hopefully if someone doesn’t have a smile, I‘ll be able to make them smile.”

These days, Fran is working as an admin assistant at DePaul University’s Student Leadership Institute. When students come into her office complaining about stress or boy problems, she shares her positive advice. Things will probably work out in the future, she tells them; haven’t they worked out in the past? And if they don’t, maybe it’s a sign to take a different path.

That’s the same thing she tells herself when something bad happens. She sees every failure or bad experience as an opportunity for learning. When Fran found herself without a job after college, her response was: I guess I’ll have to learn something about this whole getting-a-job business. You accept reality, then you do something about it.

That can be hard to do in the moment, but Fran has a little ritual that helps. Almost every morning, she wakes up with a song in her head. As she gets ready, she turns on the song and sets an intention for her day: a goal she wants to accomplish, or something she’s looking forward to. Sometimes she records it on her blog, which is named after her favorite quote: “A coeur vaillant rien d’impossible” (“With a willing heart, nothing is impossible”). This routine is Fran’s own gratitude ritual, inspired by setting an intention in yoga.

Fran believes that we all have unique talents to share with the world, but sometimes we forget what they are. A psychology test opened her eyes to her positivity, but it turns out it’s not just her #1 strength. Sharing positivity with others has become her purpose in life, whether it’s through mentoring students at DePaul, helping out at Tech Cocktail, or just widely, genuinely smiling. She says, “I hope that by being aware and sharing my positivity I am able to contribute to the world – even if it’s a small change.”